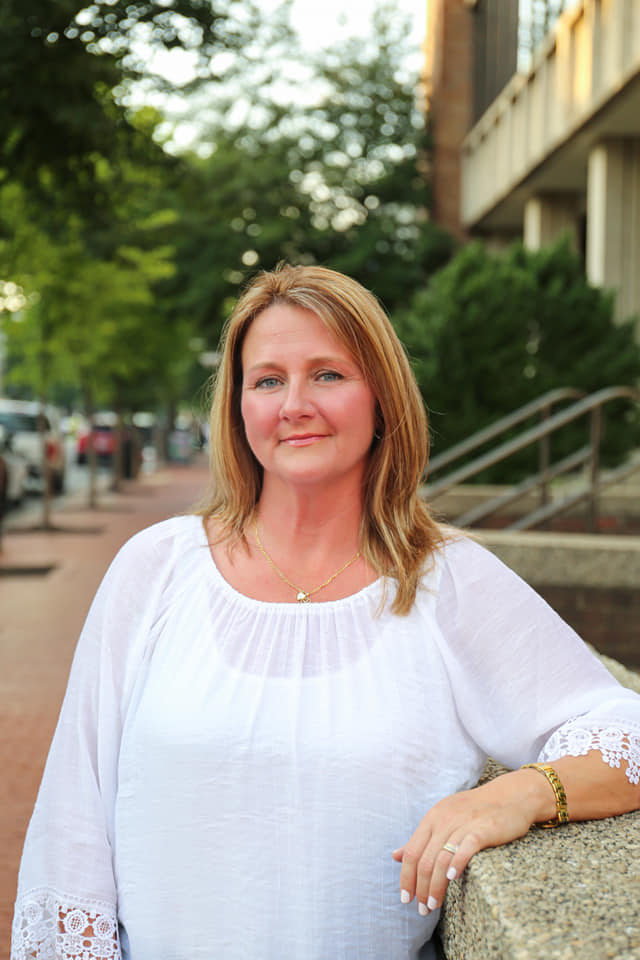 In 2002, Melissa Brown stole a purse from a grocery store cart and ran. For the past two years, she had been addicted to crack cocaine and “had gotten to a very low place in my life,” she said. Police later charged her with robbery, and she pled guilty in exchange for prosecutors dropping several other charges.

Nearly 20 years later, Brown has completed her bachelor’s degree, owns her home in Fredericksburg and has been in recovery for well over a decade. She works for a large addiction treatment program in Virginia, coordinating events at facilities across the state. She’s also a certified substance abuse counselor and would love to provide those services professionally. But under Virginia law, her past conviction makes it impossible for her to work directly with patients.

“I actually started in the field, and then my company got the letter back saying I’m ineligible,” Brown said. “And I was lucky in the sense that instead of firing me, they moved me to another position.”

When she pled guilty years ago, Brown had no idea her conviction would fall under Virginia’s extensive list of barrier crimes. Under state code, many providers are prohibited from hiring employees with certain criminal histories. The regulations largely apply to services licensed by three agencies — the Department of Health, Department of Social Services and Department of Behavioral Health and Developmental Services.

Sen. John Edwards, D-Roanoke, said the statutes were strengthened at a time when being “tough on crime” was a boon for Republican and Democratic legislators alike. And some of the convictions are also barriers under federal laws, which similarly prohibit sex offenders, for example, from working with children.

But among all three agencies, there’s consensus that Virginia goes above and beyond the federal government — and at least 10 other states — in the length and restrictiveness of its list of barrier crimes. Current law, for example, lists 176 convictions that disqualify an applicant from working in behavioral health. Many of the crimes have never been flagged on a background check, according to Stacy Pendleton, the chief human resources officer for DBHDS.

“One of them has something to do with setting a field on fire,” she said. “Many of them have to do with substance use. And then there are anecdotal things we hear, like there may have been a hunting accident where someone got a weapons charge and it becomes a barrier years down the road.”

In theory, agencies say the laws were intended to protect vulnerable Virginians receiving essential services. But in practice, they often become nonsensical. Edwards has been invested in the issue for more than a decade after he was approached by a local day care center who wanted to elect a new chairman to its board. But the man, in his early 50s, had a decades-old conviction for assault and battery stemming from a fight with his brother.

“I remember writing to (social services) and learning there was no appeals process,” he said. “I thought that was just outrageous.” In many cases, applicants with past drug-related convictions will find they’re a barrier to working as substance abuse counselors or peer recovery specialists — a support position designed to be filled by workers with “lived experience” in mental health or substance use disorders.

“What has been absent are those voices,” Del. Cia Price, D-Newport News, said at a symposium on the issue last week. “It seems to happen behind closed doors. But whenever these ineligibility letters are sent out, we end up getting a ton of calls from constituents.”

For more than a decade, though, legislation to reform Virginia’s barrier crime statutes has failed in the General Assembly. That includes a 2014 bill, submitted by Edwards, that would have made technical changes to simplify the laws for agencies and the providers they oversee.

More recently, lawmakers are taking a fresh look at the restrictions. Both Price and Edwards chair a barrier crimes subcommittee established through a 2020 Senate resolution, which tasked the group with examining the “organization, effectiveness, and fairness of such provisions.” Since Democrats took control of the state legislature, they’ve enacted widespread criminal justice reforms — many after the catalyzing murder of George Floyd at the hands of police. Amid that shifting landscape, advocates are hoping for broad reconsideration of laws that frequently amount to a lifetime employment ban in many professions.

“While I wish it hadn’t taken all the trauma of the last year, I think it has put us in place where we might be willing to act,” said Allison Gilbreath, the policy and programs director for the child advocacy group Voices for Virginia’s Children. And as the state recovers from the COVID-19 pandemic, there are new reasons for urgency.

Barrier crime statutes apply to a wide range of services, from addiction treatment programs to child care providers to congregate facilities, including mental hospitals and nursing homes. Currently, many of those employers are experiencing critical workforce shortages.

More than 30 percent of positions are unfilled across the state’s psychiatric hospitals, according to DBHDS Commissioner Alison Land, who recently told legislators the shortfalls represented a “significant” safety concern. And many preschools are warning the shortages will force them to reopen at reduced capacity just as more Virginians are heading back to the office.

“It’s really difficult when you’re trying to help someone get education and training and then these statutes don’t allow employers to hire them,” said Gena Boyle Berger, chief deputy commissioner at VDSS, which provides employment services through many of its programs. But foster care is an even bigger concern for the agency. Federal law already prohibits caregivers convicted of major crimes such as homicide, sexual assault, domestic violence or any offense involving a child. Virginia code, though, goes even farther, including several misdemeanor convictions that wouldn’t otherwise be disqualifying.

“There are already these federal safeguards,” Boyle Berger said. “And when you look at things like drug-related crimes, especially when they happened 30 or more years ago, it’s often people who served their time and have gotten their lives back together.”

The state is also less forgiving when it comes to time limits. Under federal law, drug-related convictions, along with assault and battery (among the most common offenses encountered by social service agencies), aren’t considered barrier crimes after five years. In Virginia, the limit for most crimes is between 10 and 25 years, and the law often sets other requirements for prospective foster parents, such as having their civil rights restored by the governor.

The end result, Boyle Berger said, is a system that disproportionately affects Black Virginians, who are also disproportionately likely to encounter the criminal justice system at some point in their lives. The state is known for exceptionally low rates of kinship care — placing children with relatives rather than unknown families. It also ranks among the worst in the nation for the percentage of foster kids who age out of the system. That’s especially true for Black youth, who make up 21 percent of all children entering care but 34 percent of those who age out without finding a stable home.

Many experts blame barrier crimes, at least in part, for the difficulty finding placements. Rebecca Vinroot, a social services director in James City County, still remembers a woman who was barred from fostering her own grandchild because of a decades-old felony assault charge. It happened when the woman was 18, after a fight with a friend. Some social service workers recommend relatives file for custody as a potential workaround. But that leaves them ineligible for financial support from the state — an impossible obstacle for many families.

“If you actually talk to these children, they’ll often tell you that they have an informal relationship with their grandparent or uncle or aunt or whoever but they couldn’t actually live there because of those reasons,” Gilbreath said. “And that’s incredibly frustrating for them, to know they had someone who wanted them but wasn’t able to care for them.”

‘Let’s have some common sense’

Gilbreath is one of many advocates who’d like the state to conform its own barrier crime statutes to existing — and less restrictive — federal regulations. The legislative subcommittee is tasked with delivering its own list of recommendations by the start of the 2022 General Assembly session. Winnowing down the list of convictions is a popular proposal, as is the idea of making more crimes eligible for a waiver or appeals process.

“I think people are recognizing, ‘Well, let’s have some common sense,’” said Joseph Scislowicz, the executive director for Chesapeake Integrated Behavioral Healthcare. One frustration that’s commonly heard by providers and legislators is the lack of recourse for applicants, even those whose convictions occurred more than a decade ago.

DBHDS, for example, has 26 crimes that are technically eligible for screening. Under guidance from the department, applicants with those offenses on their background can still be hired if an expert determines they’ve been “successfully rehabilitated” since the time of their conviction. The problem, Scislowicz said, is that the process is optional for employers — and he’s one of only two people in the state who are currently certified to conduct screenings.

“I think the General Assembly was well-meaning when they passed that, but I’ve done assessments on people who have been in recovery for 10, 20 years,” he said. “And that’s not really fair to them.” Brown, a rare applicant who was able to keep her job with a treatment services provider, said many people in recovery specifically seek out training to help others going through addiction. When they learn they can’t get a job in the field, it can be crushing.

“Besides going through the crime and going through the time, seeing that letter was probably one of the most discouraging things I have ever experienced,” she said. Virginia’s certification process also makes it unexpected for many applicants.

Newport News resident James Bland, for example, said he paid $225 for the exam required to become certified as a peer recovery specialist before learning he was ineligible. He felt a calling to go into the field more than 27 years after he was convicted of an unarmed bank robbery in North Carolina. After seven years in prison, and 18 years selling and servicing cars, Bland said he wanted a career working with people who were going through some of the same challenges he had experienced.

“I look at all of us as allies on the same battlefield to help bring someone into a better position,” he said. For years, he’s volunteered with local nonprofits, including an organization that teaches chess in juvenile detention facilities. Until last summer, he knew nothing about Virginia’s barrier crime laws, and the state’s materials for prospective peer recovery specialists don’t mention them.

It was until he had gotten certified that Bland learned his conviction was fully disqualifying, with no chance for screening or an appeal. Like Brown, he only found out when a prospective employer received an ineligibility letter from DBHDS.

“It’s really hard to describe just how demoralizing it is,” he said. “I’ve got my life together. I have not been in a courtroom since I got out 21 years ago. So that’s what’s frustrating — to ultimately know they’re still holding that against me.”