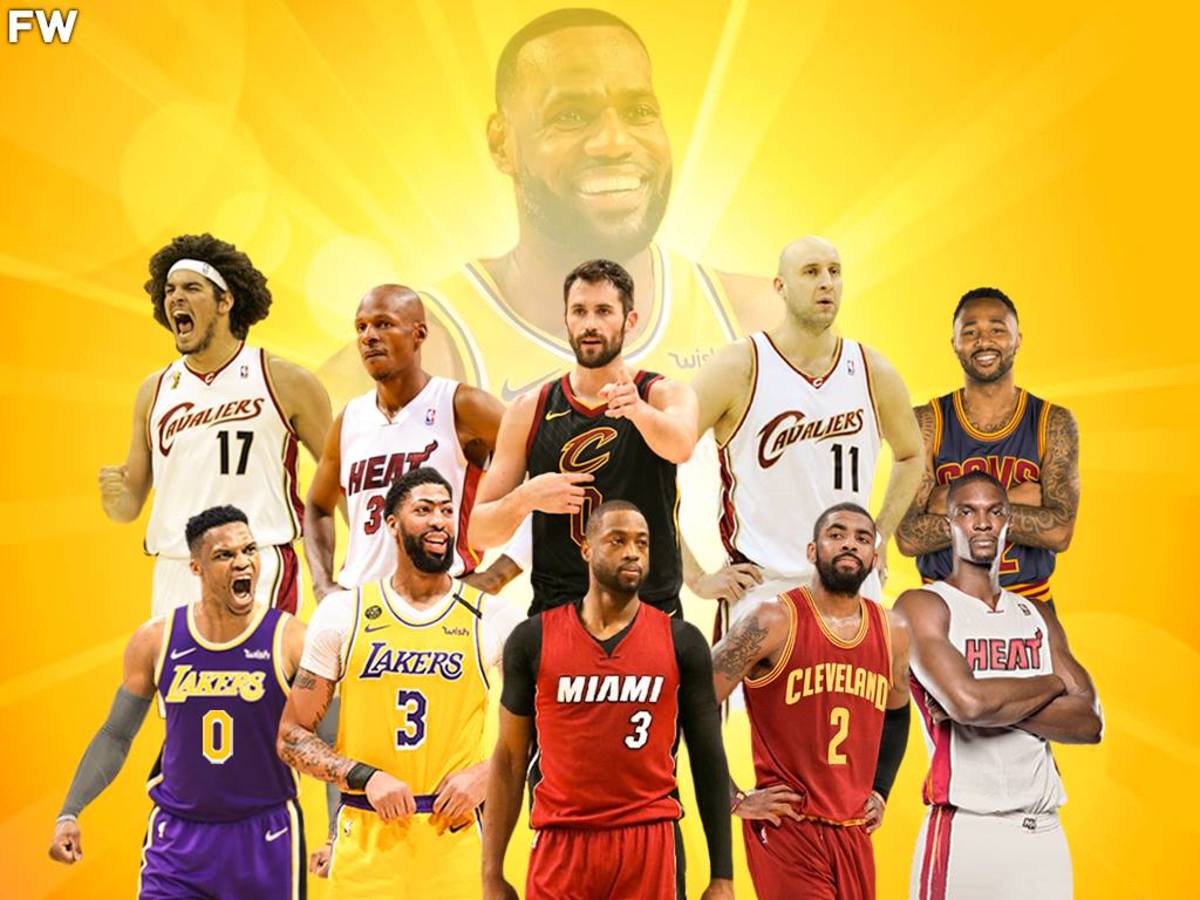 LeBron James is one of the best players of all time. LeBron has made 10 NBA Finals appearances and four championships in his career as he continues to chase down Michael Jordan for the honor of being considered the greatest player of all time. Like all superstars, including the great MJ, you have help from your teammates. After all, it’s a team game.

Varejao was a fan favorite, so much so to the point that he even came back this past year to potentially retire as a Cavalier. During their prime years, he was the team’s primary enforcer. With the afro hair flying around, he did all the dirty work for the LeBron-led teams.

Defensively, he was a hustle player and even made an All-Defensive team in LeBron’s final season (first stint) with the Cavaliers. While his stats don’t paint a picture, you can’t deny that Varejo out hustled any player he could. He was easily a big-time contributor for the 2007 Cavs team that made the NBA Finals.

Just to reiterate, in the final two seasons in James’ first stint in Cleveland, the second-best offensive player on the team was Mo Williams. The team never made it back to the NBA Finals until LeBron returned home. Regardless, Williams was a better overall player than the likes of JR Smith. Don’t believe us? Go back and watch Smith’s debacle in the NBA Finals. Williams would have never done that.

An all-time great Cavalier is Ilgauskas. In LeBron’s rookie season, Ilgauskas was coming off an All-Star appearance. He was the face of the franchise until LeBron came to town. No matter, Ilgauskas was not an egotistical player. He just wanted to win.

Ilgauskas joined LeBron in the All-Star Game in 2005 and was the team’s starting center in 2007. He left Cleveland as the all-time leader in offensive rebounds and blocks, both records that remain today. Assuming that you consider Anthony Davis as a power forward and not a center, Ilgauskas was the best center LeBron played within his career.

When Ray Allen left the league, he was the all-time leader in three-point field goals in the regular season and postseason. Since then, Steph Curry took the playoff record away and is coming for Allen’s record. Even so, Allen’s choice to play with LeBron alienated himself from future friendship with Paul Pierce, Kevin Garnett, and Rajon Rondo with the Celtics.

Regardless of having friends, Allen’s choice worked out as he won a championship in 2013. Some could say that he was the hero of that series, knocking down one of the biggest three-point field goals in NBA Finals history. All in all, Allen was a critical part of the Heat’s success in his two seasons with LeBron.

When LeBron came back home to Cleveland, it wasn’t going to be like the first regime. Despite having Kyrie Irving in the mix, James knew the team needed more, so the team traded Andrew Wiggins, Anthony Bennett, and more to bring Love to town, who was coming off an All-NBA season.

Love made the NBA Finals four straight years with LeBron doing anything he was asked. He scored, rebounded, blocked, you name it. Love was rewarded for his contributions with a ring in 2016. He was an ultimate team player.

When Bosh knew that LeBron was leaving Cleveland to join the Heat, Bosh did the same. Bosh was the best player in Raptors franchise history at the time. He could have been an icon in Toronto. Instead, he left to join a superteam and made the NBA Finals four straight years, winning two championships.

It was Bosh in Game 6 of the 2013 NBA Finals that secured the offensive rebound with time expiring and his pass to Ray Allen that helped the Heat stay alive in the series. Bosh was so effective in his four years altogether that he made the All-Star team each year while playing with James. Bosh’s career ended too soon, but he will one day be a Hall of Famer.

Accomplished While With LeBron (Present): Joined team this summer

Even though Westbrook has never played with LeBron, he is easily a top-4 teammate of all time. Westbrook owns the 2017 MVP and became the first player to average a triple-double for a season that year. In his career, he has averaged a triple-double four times, which makes him just as good, if not better, than the great Oscar Robertson.

Imagine playing with the Big O in today’s modern era. That is what Westbrook brings to the table. He is potentially the most athletic point guard we have ever seen with a Hall of Fame trajectory. Pending what he does this season, Westbrook could soar up into the top-3, or fizzle down to the bottom tier.

For now, despite a fractured relationship, Irving is a top-3 teammate of LeBron. He was given the impossible task to replace LeBron when drafted No. 1 overall, the same year LeBron left Cleveland. He suffered through some tough seasons before playing alongside LeBron, where he helped the team make the NBA Finals in each season for three years.

Irving’s three-point shot in Game 7 of the NBA Finals, the go-ahead bucket against the Warriors, will forever go down as one of the most clutch shots in Finals history. Irving’s goal is to prove he can win a title without LeBron, but he was a massive part of the 2016 championship team.

The instant chemistry that LeBron and Davis had together was almost magical. It took two years for LeBron and Dwyane Wade to figure it out and those two were best of friends. In his first season, Davis made the All-Star team, was the runner-up in the Defensive Player of the Year voting and helped the team win their first championship since the days of Kobe Bryant.

Davis is a generational player that was often overlooked because he played in New Orleans for the first part of his career. With his talent on both sides of the floor, it will be interesting to see what he can do in Year 3 now that he is healthy.

As mentioned, LeBron and Wade were very close friends, which helped Wade recruit LeBron to South Beach in 2010. Together, their chemistry was so great that even Space Jam 2 replicated one of the most iconic alley-oops in NBA history. All jokes aside, Wade made the All-Star team all four years, recorded three All-NBA appearances, and helped the team win two titles.

Wade was the 2006 NBA Finals MVP. He was the man in Miami, but he took the role of No. 2 when LeBron came to town. Not too many players are okay accepting that role, for example given being Kyrie Irving. With that said, Wade is a top player of all time and is the greatest teammate LeBron has ever had in his career.