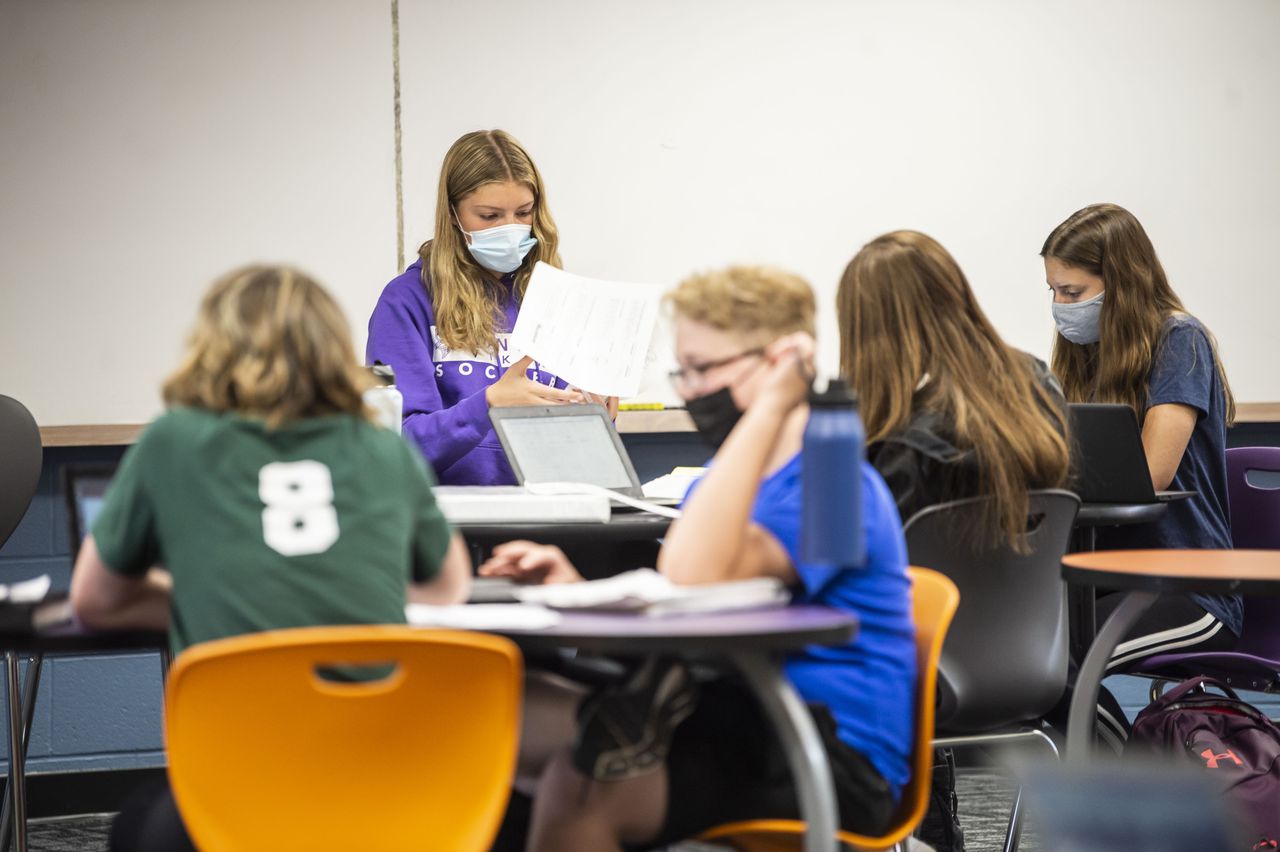 CLEVELAND, Ohio – Just as municipalities are receiving a once-in-a-generation injection of cash from the federal government, public K-12 schools and both private and public colleges are also receiving huge amounts of federal stimulus money through the American Rescue Plan.

Schools and colleges received money through previous coronavirus aid, including the CARES Act in March 2020 and the CRRSA Act in December 2020. But in most cases, they’re receiving considerably more from the American Rescue Plan – often about twice as much.

Public school districts and charter schools in Greater Cleveland – Cuyahoga, Geauga, Lake, Lorain, Medina, Portage and Summit counties – are receiving a total $974 million. By contrast, those schools received a combined $104 million under the CARES Act and $437 million from the CRRSA Act.

The money was divided based on enrollment and the number of students in low-income families, so large districts in urban areas are receiving the most. Cleveland Metropolitan School District is receiving $293 million. Akron Public Schools is getting $96 million.

How much is your district getting? A full list by county can be found at the bottom of this article.

Schools have until September 2024 to spend the money, which comes with few strings. The U.S. Department of Education wanted to give districts flexibility. So, the only restriction is that at least 20% of district funds should “address learning loss through the implementing evidence-based interventions and ensuring that those interventions respond to students’ social, emotional and academic needs and address the disproportionate impact of COVID-19 on underrepresented student subgroups.”

Administrators now face an unfamiliar problem: What should we do with all this money?

“This infusion of federal monies is historic in size,” said Ryan Pendleton, CFO and treasurer for Akron Public Schools. “There’s really no other comparison of an investment and public education that we’ve ever seen in this size and scope, but it comes with great responsibility.”

A balancing act between innovation and sustainability

The stimulus funds are one-time-only, so districts are wary of creating programs they’d have to figure out how to pay for afterward.

“The new money is incredibly welcomed, and also a little bit tricky,” said Eric Gordon, CEO of the Cleveland Metropolitan School District. “There are a lot of organizations across the country counseling school districts not to make long-term investments with one-time money because of the cliff that’s created.”

CMSD, for example, is considering expanding its art, music and physical education programs, so students can learn an instrument, make pottery or join a fitness class. But in a few years, when the money that’s paying for those teachers is gone, what happens to those programs?

“What we’re trying to do is make those investments now, bank our local dollars for as long as we can, but at some point, say to our community, ‘Here’s what we’ve been able to give you post-pandemic. Cleveland, are we willing to pay for it when the time comes?’”

Phillip Lovell, associate executive director at the Washington, D.C.-based nonprofit Alliance for Excellent Education, said making the best use of these funds is a challenge for education leaders, who are understandably exhausted after navigating the past year and a half.

Lovell said schools should consider innovative approaches to traditional programs and methods of addressing learning loss. Instead of typical summer school, districts could partner with summer camps to offer more enticing and enriching experiences. Strategies for reengaging high schoolers, especially seniors, could include offering free childcare during the school day. And to encourage students to apply to college, high schools could hold campaigns for students to complete the FAFSA.

A major part of helping students recover academically is also taking care of their social and emotional needs, Lovell said.

Similarly, the Brookings Institute published an article urging local leaders to use American Rescue Plan money to support “playful learning landscapes,” which allow school-age children to fill in achievement gaps in cognitive and social skills through interactive installations and activities.

The U.S. Department of Education agrees, with its requirements for districts to focus on addressing academic, social and emotional needs, with particular attention toward students in historically underrepresented groups.

“We need to need to emerge from the pandemic, with stronger systems than we have going into it. And that means, you know, we shouldn’t press pause,” Lovell said. “What can we do that will help to solve both the immediate problems that have arisen from COVID, as well as the problems that have already been that have always existed?”

How do some local districts want to spend the money?

Cleveland.com and The Plain Dealer reached out to a handful of district leaders in Northeast Ohio to learn how they want to spend their American Rescue Plan money. Here’s what they said:

“We had used some of our previous [stimulus] money for technology and we’ve used it for additional counseling, but with this bucket of money, we’ve really shifted to direct learning loss support,” Markus said.

Superintendent Charles Smialek wants to spend most of the district’s $22 million on addressing students’ social and emotional needs. Parma added a guidance counselor at each high school, now up to five or six per school. They also added a new position of one “home liaison” to each middle school. The position is similar to a guidance counselor but more focused on social-emotional aspects, including running support groups and connecting parents with resources in the community. The district also added more board-certified behavioral analysts to the elementary schools, bringing the total to seven.

“Obviously, there’s learning loss, certainly, but you have to look at the whole child,” Smialek said. “There’s also a need to make sure that we have better resources and better supports in place for students who may have experienced quite a bit of trauma, or just family adversity throughout the pandemic.”

To address learning loss, Parma is seeking to hire more teachers to decrease the average class size. Classes used to range from 25 to 28 students – 28 in the older grades and 25 in the younger grades, “but quite frankly, it would often go above that,” Smialek said.

The stimulus money is allowing Parma – which has also faced failed tax requests recently — to set targets for student to teacher ratios, at 20:1 in kindergarten and first grade, 22:1 in second grade, 24:1 for grades three and four and 26:1 for grades five, six and seven.

The district also used stimulus money to offer free summer school this year; about 800 students are enrolled for either intervention or enrichment, Smialek said.

Pendleton, the district’s CFO, said plans are still in flux given the large amounts of money and responsibility. Plus, the district just came under new leadership. Christine Fowler-Mack took over as superintendent on July 1, succeeding David James who led the district for 13 years.

“She (Fowler-Mack) completely understands the opportunity and responsibility of this money,” Pendleton said. “Not speaking for her, but she already has a clear vision around student achievement, equity, stakeholder engagement, how can we leverage our facilities, and then the human capital to support those initiatives. She’s made those clear, and I think over the next couple of board meetings, she will be sharing that vision and timeline.”

District officials have been consulting with employees, students and their families and some of the hundreds of organizations that partner with the district in brainstorming how best to spend the money.

“We’ll still use some of that $96 million to cover COVID-related expenses, increased social distancing requirements, increased bus routes, increased staff to create lower class sizes to accommodate for that,” Pendleton said. “So, there’s still be some day-to-day expenses that I think would qualify for those monies. But the future, innovative kind of response to COVID – those plans are ongoing.”

Gordon listed ways the district is seeking to spend its $293 million:

On the last point, Gordon said it’s hard to estimate how many students have gone off the radar, but said it’s in the thousands.

“We think there’s probably 3,000 or 4,000 kids that- just like, pre-K and K students, just didn’t come. So we’ve got to go get those kids and get them engaged this year because the parents kept them home last year. High school students: while they were on the rolls, they got jobs, like Amazon, and so they weren’t actively engaged in our classes. Are they dropped out? We don’t know. When school starts, are they going to show up? We don’t know.”

High school students are being paid to reach out to their peers, and through a partnership with the teachers union, some of their members who were not working this summer were hired to make phone calls, knock on doors and make home visits.


Not seeing the list of schools? Some mobile users may need to use this link instead.